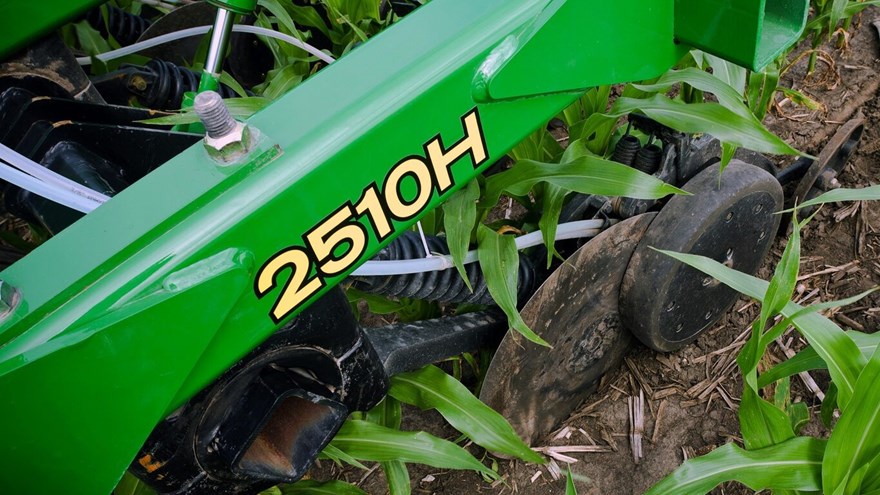 In many areas, a conventional anhydrous application is a pass through the field at 8 km/h to 12 km/h (5 mph to 7.5 mph). To increase productivity, a few options are available:

The 2510H’s single-disk opener design has a lower draft requirement and allows anhydrous application up to 16 km/h (10 mph). 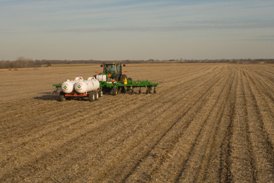 The single-disk opener on the 2510H utilizes a 559-mm (22-in.) blade that is angled 4 degrees to open a narrow slot for anhydrous application. 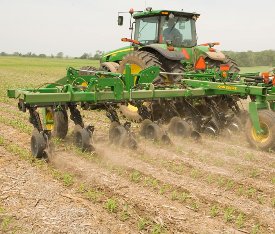 Productivity and low soil disturbance are two of the three ingredients for a successful sidedress application. The third is clearance under the frame and around the wheel modules.

Early sidedress application with a conventional applicator can cause too much soil throw and damage or small corn plants. With a single-disk opener, soil disturbance is very low for early sidedressing, as early as right after planting.

As the season progresses and the corn gets taller, underframe clearance becomes vitally important to sidedressing using anhydrous application. The underframe clearance on the 2510H is 762 mm (30 in.) and there are no tandem wheel axles with low clearance. The 2510H increases the sidedress window by nearly 300 percent.

The 2510H has configurations for off-row and on-row fertilizer banding in 16-row configurations. With a working width of 12.2 m (40 ft), the 16-row 2510H can be used for pre-planting and fall applications to apply on row. This allows for better matching of the tracks from application with subsequent tasks like planting. It also makes execution of banding easier.

The 2510H High-Speed Applicator is truly a three-season machine: fall, spring, and sidedressing.

John Deere has tested this placement across the Corn Belt in real-world field applications and plot-size treatments. More than 10000 acres of spring pre-plant anhydrous ammonia application yielded no reports of seedling damage.

To further evaluate shallow placement, plot-scale studies were initiated with three university cooperators that put the concept to the test by planting right over the anhydrous application track seven days after application.

To avoid seedling damage with the 2510H, the same recommendations apply as when using a conventional shank applicator:

Retention at a shallow depth

John Deere has gone to great lengths to verify the anhydrous application retention provided by a 2510H is equal to that of a shank at a shallow depth.

The brick soil sampling method entailed extracting a brick of soil in the injection zone 24 hours after application and then sent off to a lab for analysis. A side-by-side comparison of the 2510H with a conventional shank revealed equal retention.

The other two methods were the litmus paper test and the chamber technique to collect emissions.

All three methods revealed equal retention with a shank applicator. 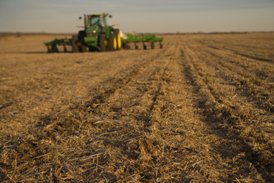 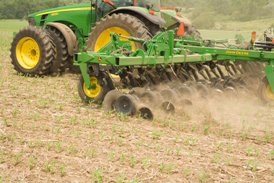 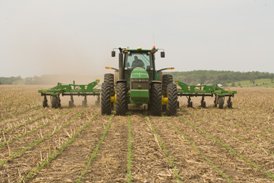 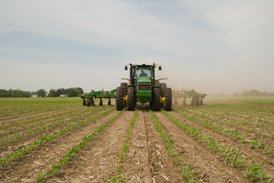 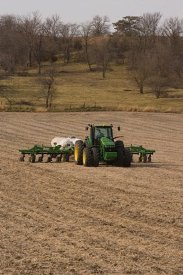 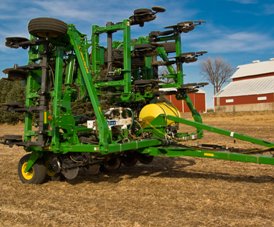 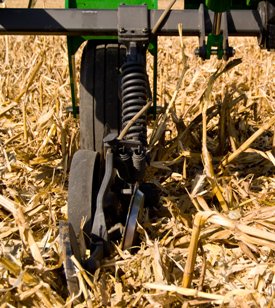 The three-year warranty on the 2510H covers:

All other components (disk standards, hydraulics, electronics, and safety lights) and attachments, such as rear hitches, are under warranty for one year as the warranty definition has not changed. The same exclusions and administration as defined in the Warranty Administration Manual applies.

The following items are not under warranty:

The 2510H is equipped for safe operation and safe transport with the following base equipment: 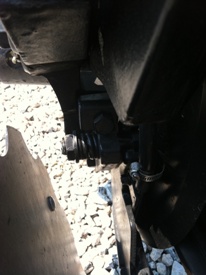 The floating scraper offered on 2510H High-Speed Applicators improves wear by allowing the scraper to float and flex along the blade during application. Instead of a rigid mount, the scraper has a spring pack that floats with the blade. This increases the wear life of the scraper assembly.

The floating scraper also improves residue flow in high-residue conditions. Keeping the scraper in constant contact with the opener eliminates residue from getting caught between the scraper and the blade.

A high-wear beaver tail extension is also available on the floating scraper for the 2510H Applicator. The beavertail extension helps improve sealing in various conditions. 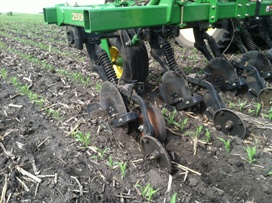 The optional ski on the 2510H High-Speed Applicator takes the place of the gauge wheel on the opener. The ski helps eliminate bull dozing of loose soil and residue in heavy primary-tillage conditions.

Sorry, currently there are no specs but check back with us later.
Accessories and Attachments

Expand All Collapse All

CAN SHOPPA'S HELP YOU FIND SOMETHING?